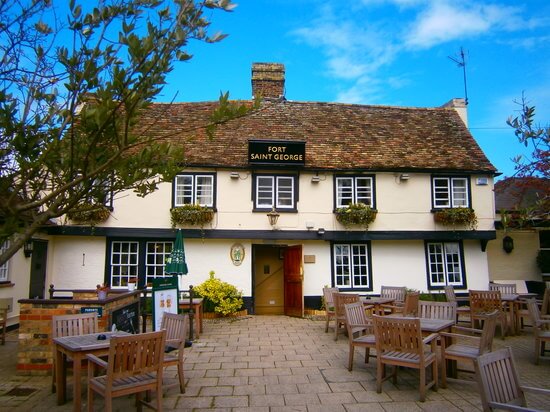 Parts of this riverside pub date back to the 16th century and it was originally built on an island. It gets its name from its resemblance to the Fort St George in Madras, which when built in 1639, was the first British fort in India. (the pub used to be callled the Fort St George in England so people wouldn’t confuse the two but the last two words have sadly been dropped). From the front door you turn right into the snug which has lost some of its character over the years but retains an open fire and tiled floor. The large main bar has a wood-boarded floor and rather spartan furnishings but great views of the river. To the left of the entrance is the restaurant, part parquet floored and part quarry tiled with some vestiges of the old walls but mostly repro fixtures and fittings. Again lots of windows onto the river. Food is from the standard GK managed house menu, served 11am to 9pm every day, including some main meals for under £10. If this is a bit much for you, slum it next door at the Michelin-starred Midsummer House. In front of the pub is a large patio overlooking the common. Its seasonal popularity is down to its location on the common next to the river.